Navigating Privilege in the Workplace - Locelle

Navigating Privilege in the Workplace

“I define privilege as an unearned power. It is a special group that has these unearned, special rights.”

Stephanie Redivo has been working in the field of Diversity and Inclusion (D&I)  for over half a decade. In an interview with Locelle Founder, Humaira Ahmed, she said, “one topic we haven’t been talking about is privilege. I really see that the amount of privilege that people have affects our system and we are not having those conversations because people are getting triggered.” However, conversations should not be limited because people are getting triggered as these topics do need to be brought to light. Voices need to be heard. Through the Black Lives Matter (BLM) movement, it is particularly clear that now is the time for people to be made uncomfortable. It is only then that people will begin to see their own biases.

Humaira was able to speak directly to this topic, being a woman from Pakistan living in Canada. She acknowledged, “Because I colour my hair, you cannot say automatically where I am from. I have had more opportunities than my Pakistani looking and speaking counterparts just because of the way that I look. That is an unfair advantage that I have.” To that comment, Stephanie responded, “I think that by people talking about privilege and recognizing the privilege that people have, it brings it to the forefront so it’s not so much of a trigger.” It is extremely important to recognize privilege in all forms. People must understand that privilege has allowed certain people to benefit from a system that has been in place for years. This system is not working. Stephanie went on to explain that, “When we talk about the common types of privilege we talk alot about race, and that is the first one that comes to mind but there is also ability, there is social class, there is education. I as a white, able bodied woman have benefited from the system.”

Delving into this topic from a professional standpoint, Stephanie commented, “There is a reason why sometimes potential entrepreneurs can go and start multiple companies, because they already have a circle of influence. They already have a financial backing, coming from a place of privilege, so it is not as risky as compared to an entrepreneur starting out with nothing.” Another aspect of this is that having these resources in place gives potential entrepreneurs a strong sense of confidence which then can often further push them ahead and really allow them to grow a network. The two also touched on hiring, and specifically the idea that “if you truly believe in diversity and inclusion you should be looking at the ages within your team, the ethnicity of your team and where you team is located in order to truly bring in that global perspective.” In this way, D&I brings about more innovation and profit to the company. People will often complain about missing opportunities because the company ‘wanted the ethnic candidate’, and clearly these people are completely missing the point. Stephanie expressed, “the popular group has always benefited from this system and like I said before, the system as it is in place right now doesn’t work and it is not ok.”

Humaira brought forward the reality of male dominant workplaces and how that can have an effect on women, and asked Stephanie her take on how women can navigate this system to a place of leadership. One of the major points which was discussed was that, “women who are sponsored give back much more.” For example, women who have a positive experience with mentorship have a greater motivation to pay it forward. Through this cycle they can grow a strong network and build each other up. Both agreed that as women, “we need to push more for what we deserve.”

Solana Phillips / About Author
Solana is the community engagement manager at Locelle. She is currently a student at McGill University studying the science of psychology. She is passionate about women's rights and growing her network.
More posts by Solana Phillips 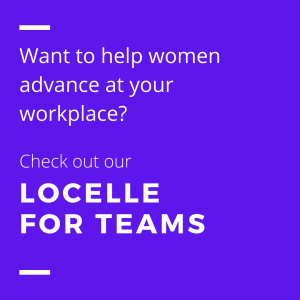 Locelle (pronounced Lok-elle) is a global platform created for women in the workplace. Through mentorship and career development opportunities, Locelle delivers professional growth to your employees.